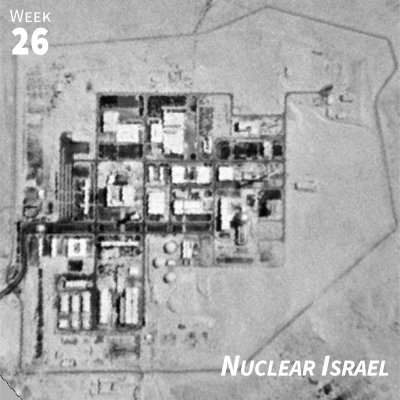 The Treaty on the Non-Proliferation of Nuclear Weapons (NPT) was signed on July 1, 1968. According to the U.N., “More countries have ratified the NPT than any other arms limitation and disarmament agreement, a testament to the treaty’s significance.”1 Only five countries are not party to the treaty: Noth Korea, South Sudan, India, Pakistan, and Israel. As we mark the anniversary of this important treaty, the Kumi Now community looks at the story of how the world came to know that Israel possessed nuclear weapons and examines what this means for Palestine and the region, so that together we can rise up.

Currently, international data estimates that Israel has 80 to 90 nuclear warheads and has produced enough weapons-grade plutonium for up to 200 of them. Widely discussed have been the Dolphin-Class submarines, built and partly financed by Germany and the different intercontinental range ballistic missiles. Israel continues to neither deny nor admit to owning nuclear weapons and has declined to sign the Treaty on the Non-Proliferation of Nuclear Weapons (NPT).

Israel started investigating the nuclear field soon after it declared independence in 1948, and with French cooperation secretly began building the The Shimon Peres Negev Nuclear Research Center, a facility near Dimona, housing a nuclear reactor built in the late 1950s.

The first extensive details of the weapons program were made public in 1986 through Mordechai Vanunu, a nuclear technician at the center who became a peace activist. Vanunu was later captured by the Mossad and brought back to Israel, where he was sentenced to 18 years in prison, including more than 11 years in solitary confinement. Vanunu claims that he suffered cruel and unusual punishment while in prison. Following his release, he was barred from leaving the country and talking to foreigners, and later arrested and imprisoned for another three months for talking to reporters.

In 2015, the National Security Archive published a collection of documents about how the United States learned about Israel’s nuclear program, and how Israel attempted to cover up the truth. These documents confirm much of what Vanunu had said decades before.

The international community has been clear about the danger of nuclear weapons. 190 countries are party to the Treaty on the Non- Proliferation of Nuclear Weapons, but Israel is not one of them. Furthermore, the NPT established a safeguards system overseen by the International Atomic Energy Agency (IAEA). Given Israel’s refusal to admit to its nuclear capabilities, it has never allowed the IAEA to supervise its production and handling of nuclear material. As such, Israelis, and all of us around the world, have no assurance that its nuclear materials are being handled safely and are safe from theft, nor can we know if Israel is selling nuclear materials to rogue actors or states.

Israel has also not signed the Biological and Toxin Weapons Convention (BTWC). Thankfully, it is believed that Israel does not have a current chemical weapons program. However, it is clear that Israel needs to be more open about all of its weapons programs. Given the lengths that Israel went to in order to silence Vanunu and hide its nuclear program, it is clear that activists must continue to push for the declassification of past materials and pressure current politicians to take a stand against Israel’s nuclear program.

Through the week, Kumi Now will publish essays and stories from different organizations further exploring Israel’s status as a nuclear state and highlighting what they are doing to address this danger.

The Peace Flame of Hiroshima—taken from the embers of the Atomic bomb in 1945 will be the leading theme of the Earth Caravan Peace Conference in 2020.

The Peace Flame is an actual flame which Tatsuo Yamamoto took from the embers of the fire following the atomic bombing of Hiroshima on the 6th of August, 1945. He carried it to his hometown, Hoshino village in Yame city, Fukuoka. The flame has been kept alive in the village as a symbol of peace and remains lit in the town’s Peace Tower until now.

Earth Caravan has been travelling with the Peace Flame since 2015 transporting its message from continent to continent. In 2019 we are accompanied by Setsuko Thurlow, a Hibakusha (nuclear bomb survivor), who was 13-years old when the atomic bomb scarred the face of the world forever. Setsuko Thurlow received the Nobel prize in 2017 on behalf of ICAN-International Campaign on Abolishment of Nuclear Weapons, and spoke at the U.N. in 2017 about the need to ban nuclear weapons.

The Earth Caravan is organizing, in cooperation with the Holy Land Trust. a peace festival and peace conference in Bethlehem with artists from around the world, building a vision for a peaceful future without nuclear weapons and without walls around, between, and within us.

Jerusalem and Bethlehem, these very symbolic places for the suffering of Palestine must be centers for a new culture of communication to realize freedom and justice.

Israel has nuclear weapons, but the world is in denial. We want to help change this by designing nuclear hazard signs and giving them to Israel! Send your sign to your country’s embassy along with the message, “We know you have nuclear weapons. We donate this sign to you!”

Take a photo of your nuclear sign and post it to social media. Include a link to this page of the Kumi Now website along with the hashtags #KumiNow, and #Kumi26.

Personal words from the speech Mrs Setsuko Thurlow held at acceptance of Nobel prize for Peace on behalf of ICAN in 2017:

“I speak as a member of the family of hibakusha—those of us who, by some miraculous chance, survived the atomic bombings of Hiroshima and Nagasaki. For more than seven decades, we have worked for the total abolition of nuclear weapons.

We have stood in solidarity with those harmed by the production and testing of these horrific weapons around the world. People from places with long-forgotten names, like Moruroa, Ekker, Semipalatinsk, Maralinga, Bikini. People whose lands and seas were irradiated, whose bodies were experimented upon, whose cultures were forever disrupted.

We were not content to be victims. We refused to wait for an immediate fiery end or the slow poisoning of our world. We refused to sit idly in terror as the so-called great powers took us past nuclear dusk and brought us recklessly close to nuclear midnight. We rose up. We shared our stories of survival. We said: humanity and nuclear weapons cannot coexist.

I was just 13 years old when the United States dropped the first atomic bomb, on my city Hiroshima. I still vividly remember that morning. At 8:15, I saw a blinding bluish-white flash from the window. I remember having the sensation of floating in the air.

As I regained consciousness in the silence and darkness, I found myself pinned by the collapsed building. I began to hear my classmates’ faint cries: “Mother, help me. God, help me.”

Then, suddenly, I felt hands touching my left shoulder, and heard a man saying: “Don’t give up! Keep pushing! I am trying to free you. See the light coming through that opening? Crawl towards it as quickly as you can.” As I crawled out, the ruins were on fire. Most of my classmates in that building were burned to death alive. I saw all around me utter, unimaginable devastation.

Processions of ghostly figures shuffled by. Grotesquely wounded people, they were bleeding, burnt, blackened and swollen. Parts of their bodies were missing. Flesh and skin hung from their bones. Some with their eyeballs hanging in their hands. Some with their bellies burst open, their intestines hanging out. The foul stench of burnt human flesh filled the air.

Thus, with one bomb my beloved city was obliterated. Most of its residents were civilians who were incinerated, vaporized, carbonized— among them, members of my own family and 351 of my schoolmates.

In the weeks, months, and years that followed, many thousands more would die, often in random and mysterious ways, from the delayed effects of radiation. Still to this day, radiation is killing survivors.

Whenever I remember Hiroshima, the first image that comes to mind is of my four-year-old nephew, Eiji—his little body transformed into an unrecognizable melted chunk of flesh. He kept begging for water in a faint voice until his death released him from agony.

To me, he came to represent all the innocent children of the world, threatened as they are at this very moment by nuclear weapons. Every second of every day, nuclear weapons endanger everyone we love and everything we hold dear. We must not tolerate this insanity any longer.

Through our agony and the sheer struggle to survive—and to rebuild our lives from the ashes—we hibakusha became convinced that we must warn the world about these apocalyptic weapons. Time and again, we shared our testimonies.

But still some refused to see Hiroshima and Nagasaki as atrocities—as war crimes. They accepted the propaganda that these were “good bombs” that had ended a “just war.” It was this myth that led to the disastrous nuclear arms race—a race that continues to this day.

Nine nations still threaten to incinerate entire cities, to destroy life on earth, to make our beautiful world uninhabitable for future generations. The development of nuclear weapons signifies not a country’s elevation to greatness, but its descent to the darkest depths of depravity. These weapons are not a necessary evil; they are the ultimate evil.

On the seventh of July this year, I was overwhelmed with joy when a great majority of the world’s nations voted to adopt the Treaty on the Prohibition of Nuclear Weapons. Having witnessed humanity at its worst, I witnessed, that day, humanity at its best. We hibakusha had been waiting for the ban for seventy-two years. Let this be the beginning of the end of nuclear weapons.

All responsible leaders will sign this treaty. And history will judge harshly those who reject it. No longer shall their abstract theories mask the genocidal reality of their practices. No longer shall “deterrence” be viewed as anything but a deterrent to disarmament. No longer shall we live under a mushroom cloud of fear.

To the officials of nuclear-armed nations—and to their accomplices under the so-called “nuclear umbrella”—I say this: Listen to our testimony. Heed our warning. And know that your actions are consequential. You are each an integral part of a system of violence that is endangering humankind. Let us all be alert to the banality of evil.

To every president and prime minister of every nation of the world, I beseech you: Join this treaty; forever eradicate the threat of nuclear annihilation.

When I was a 13-year-old girl, trapped in the smoldering rubble, I kept pushing. I kept moving toward the light. And I survived. Our light now is the ban treaty. To all in this hall and all listening around the world, I repeat those words that I heard called to me in the ruins of Hiroshima: “Don’t give up! Keep pushing! See the light? Crawl towards it.”

We have a YouTube playlist with videos about Israel and its nuclear program.