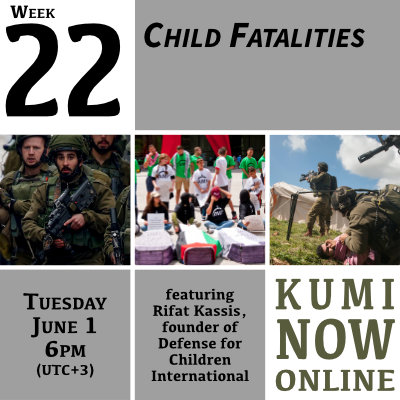 On June 1 we learned about the horror of child fatalities. Our guest was Rifat Kassis, founder of Defense for Children International.

Please register to join us. Here are the details:

Rifat Kassis has been a leading figure and expert in the Palestinian, regional and international child rights community for more than twenty five years. He founded the first child rights organization in Palestine in 1991 and was the elected President of the International Executive Council of Defense for Children International in Geneva for seven years. For eight years he ran the Palestinian section of DCI and during this period he founded the DCI movement in the Arab World. Although he left DCI Palestine in December 2014, he is still member of the International Executive Council and serves as the General Commissioner of the DCI movement in MENA region. Since June 2015 till now he leads GRIP Consulting and conducts consultancies for local and international organizations in the fields of human rights and organizational development.

Rifat Kassis has over 35 years of experience working in different countries and different fields. He was Director of YMCA Rehabilitation Program and later Programs director of YMCA. He worked in Kyrgyzstan representing 3 European donor agencies. He initiated YMCA/YWCA Joint Advocacy Initiative. He worked in Geneva at WCC as manager of EAPPI. He co-founded international consulting agency “Alternatives” to support global civil society. He was Lutheran World Federation Representative in Jordan, running their program dedicated to Syrian refugees. In 1995, he co-founded Alternative Tourism Group (ATG), on justice tourism. Same year, he helped establish ARD/Denal in Chechnya provides rehabilitation services to children. He served as member of Advisory Group to ICCO, Dutch and from 2001 to 2008, he was member of Advisory Group for DanChurch Aid. He was member of World Economic Forum Global Agenda on child welfare from 2008 to 2010. He is co-author of Kairos Palestine document and was its General Coordinator. He has published numerous articles and contributed to 14 books and wrote two books. He has frequently been invited to speak at conferences.

You can send messages thanking DCI Palestine for their important but difficult work, and ask that your thanks be passed on to Malala. Email them to: