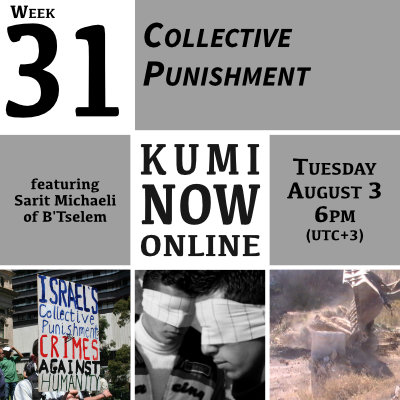 On August 3rd we learned about Israel’s use of collective punishments, which are illegal under international law. Our guest was Sarit Michaeli of B’Tselem.

Sarit Michaeli is the International Advocacy Officer for B’Tselem. You can follow Sarit on Twitter. +972 Magazine has a couple recent articles by Sarit and you can see her interviewed on TRT World a few years back.

B’Tselem is an Israeli human rights organization founded in 1989 foundation. At the time, B’Tselem devoted itself primarily to documenting Israeli violations of Palestinians’ human rights in the West Bank (including East Jerusalem) and the Gaza Strip. Its goal was to minimize such violations, and operated based on the assumption that the occupation was a temporary state of affairs.

However, as time passed, its position changed:

“Yet after more than half a century of occupation, during which time Israel implemented policies which cemented significant changes that indicate long-term intentions, this reality can clearly no longer be considered a temporary one. Therefore, while continuing to document and publicize human rights violations, B’Tselem – in its capacity as a human rights organization – now unequivocally demands an end to the occupation. To promote that goal, B’Tselem works to expose the injustice, violence and dispossession inherent to the regime of occupation, to deconstruct the apparatuses that enable it, and challenge its legitimacy in Israel and internationally.”

Recently, it published the groundbreaking report “A regime of Jewish supremacy from the Jordan River to the Mediterranean Sea: This is apartheid”. This was the first time that a major Israeli organization has called the occupation a form of apartheid. You can read the report and the visual explainer.

Kumi Action is at:
https://kuminow.com/collectivepunishment/#kumiaction

Is your local community supporting the occupation with your tax dollars? A major supplier of tear gas, and possibly other equipment, used in the occupation is Combined Systems. They have a long history with Israel, as documented by The Electronic Intifada in 2011. In addition to contributing to the terror of the occupation, the long-term effects of tear gas exposure are unknown.

Send a letter to your local police chief or sheriff asking, “Does your department purchase from Combined Systems (https://www.combinedsystems.com) or any other companies that profit from the Israeli occupation? Please cancel any contracts with these companies and refuse to do business with them in the future. I love my safe community and police officers, but I don’t want to  support the Israeli occupation.”

While it is good to send these messages directly to your police and sheriff departments, we can amplify the scrutiny of local law enforcement agencies by also making these messages public, tweeting your questions to them and posting these questions to their Facebook pages. Remember to tag your local agencies and include a link to this page of the Kumi Now website along with the hashtags #KumiNow and #Kumi31.