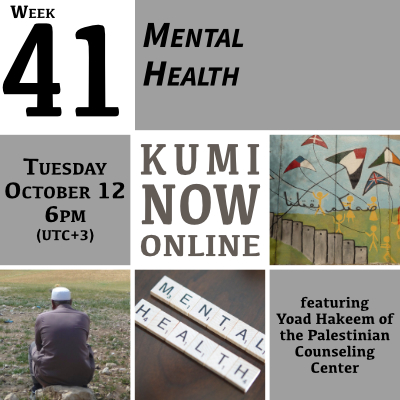 Here are Yoad Hakeem’s slides from the presentation.

On October 12th we learned about the mental health impacts of the ongoing occupation of Palestine, in particular the blockade of Gaza. Our guest was Yoad Hakeem, a clinical psychologist with the Palestinian Counseling Center.

Yoad Hakeem represents the Palestinian Counseling Center (PCC). The PCC was established in 1983 by a group of psychologists, educators and community activists to provide professional and quality mental health care to Palestinians in Jerusalem and the West Bank. Since its inception, and through its team of multi-disciplinary counselors and experts, the PCC has served as a catalyst in promoting community-based development and introducing the concept of mental health in Palestine. At the time of its founding, mental health services in the region were restricted to psychiatric treatment for mental disorders at mental health hospitals and private clinics operated by psychiatrists. Treatment methods used were largely archaic, limited to bio-medical approaches, including medication and electric shock therapy. To counter these potentially harmful tactics, work at the center began, on a voluntary basis, through awareness-raising efforts in schools on the importance of mental health counseling and working with children exposed to physical and political violence. Since then, the PCC has passed through a number of phases in its development process that have led to its present shape and character.

Kumi Action is at:
https://kuminow.com/mentalhealth/#kumiaction

This week, help us inform mental health workers around the globe of the mental health crisis in Palestine. You can help by reaching out to your local mental health clinics and practitioners and doing the following:

Share your messages to local mental health providers on social media, tagging them whenever possible. Include a link to this page of the Kumi Now website along with the hashtags #KumiNow and #Kumi41.

Organizations to let them know about:

Link people to this page of the Kumi Now site: https://kuminow.com/mentalhealth/