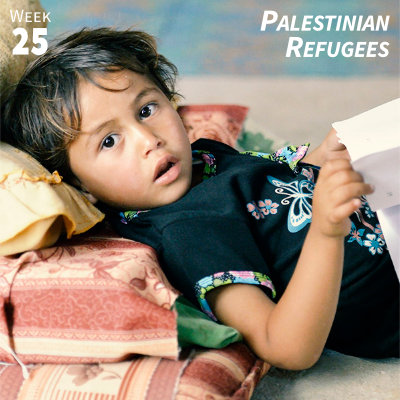 Palestinians who were either forced from or fled their homes in 1948 and 1967 hoped for a quick return to their houses and land. Few would have foreseen that, decades later, they and their descendants would be living as refugees or internally displaced Palestinians. As the United Nations celebrates June 20 as World Refugee Day,1 we want to work to restore hope to those original Palestinian refugees and their descendants. Here is what you should know about Palestinian refugees and what you can do so that together we can rise up.

In 1948, over a million Palestinians were uprooted as a result of the Nakba. In 1950 the United Nations Relief and Works Agency for Palestine Refugees in the Near East (UNRWA) was set up by the United Nations in order to address the housing, health, education, and welfare needs of refugees that were mostly housed in temporary shelters. In 2019 UNRWA reported that over 5.4 million Palestinian refugees were registered with its offices in the five geographic areas where it works: Jordan, Lebanon, Syria, the West Bank, and Gaza. There are 58 refugee camps in the region: 10 in Jordan, 12 in Lebanon, 9 in Syria, 19 in the West Bank, and 8 in the Gaza Strip. 28.4% of all registered refugees continue to live in camps, with the highest percentage in Lebanon with 50.6%, followed by Gaza with 40.9%.

At the secret discussions held in Oslo, Norway, the parties agreed that the refugee issue (together with Jerusalem, the settlements, security arrangements, and final borders) would be discussed at a later stage in negotiations. The Palestinian refugee issue remains as intractable as ever and no permanent peace solution between Israel and the Palestinians can take place without either ensuring the rights of Palestinian refugees to return or providing restitution.

What issues most affect the refugees? The Palestinian Central Bureau of Statistics and UNRWA lay out many disheartening statistics in their latest reports:2

UNRWA estimated that the funding needed in 2019 to meet emergency interventions was US$276,902,971 in Syria/Lebanon/Jordan and US$138,460,418 in Gaza and the West Bank. And yet, as of October 2018, only US$112.8 million had been pledged: only 28.2 percent of that total. Much of this due to the Trump administration’s decision to cut funding to UNRWA. (See Week 33: Cuts to Humanitarian Aid) Clearly, there is a need for both pressure on the United States and other funders, and the continued work and support of other organizations assisting Palestinian refugees.

With so many Palestinian refugees in trouble, it is easy to think abstractly, focusing on the numbers. However, it is important to remember that behind each of these numbers are thousands and millions of individuals and families, each with a life to live and a story to tell. Throughout the week, Kumi Now will publish essays and stories from different organizations and individuals, getting beyond the numbers to explore the lives and realities of Palestinian refugees and highlighting what is being done to help them.

Essay contributed by Department of Service to Palestinian Refugees. Updated for the second edition of Kumi Now.

Story: From “Three Palestinian refugees share their stories of displacement, loss and hope to return to their villages” by Jonathan Cook, Dylan Collins, and Ezz Zanoun

“The Story of Salwa Naser” (the two other stories can be read in the link below.)

Salwa Naser left her family home in the port of Jaffa in 1948 when she was six. A refugee twice over, today she lives in a small breeze-block room that abuts her son’s apartment in Beirut’s Shatila refugee camp, an overcrowded square kilometer of land on the city’s southern outskirts.

Built in 1949, the camp was meant to temporarily house some 3,000 Palestinians fleeing war to the south [of Lebanon], but is now home to well over 22,000 people-three generations of Palestinian refugees, poor migrant workers from across Asia, and an increasing number of Syrian and Palestinian-Syrian refugees fleeing a war that has been raging in neighboring Syria for more than five years.

“Jaffa is beautiful … There’s nothing else like it,” said Salwa, recalling her family’s seaside home in Jafa’s Ajami neighborhood. “Our house was right next to the sea … just down the stairs. There was nothing between the sea and us. We’d play by the sea every single day.”

As violence spiked between Jewish Zionist militias and Palestinians, her father, an important figure in Jaffa’s port, pleaded with his Syrian wife to take their nine children and leave via boat to Beirut. “I remember when the violence all started,” said Salwa, sitting in her sparse, one-room home in Shatila. “I may have been only six when we left, but Jaffa will always be home … I’m still sad about my school. It was … it was a proper school. There was structure … even the food was good. Our uniforms were so cute. We had options: either blue shorts or blue skirts, and a white shirt and a white scarf. I always chose the skirt.”

Salwa said she and her classmates didn’t realize the rising communal tensions until the windows of her first grade classroom shattered one morning after an explosion rocked the quiet, coastal neighbourhood. “My parents really did a good job keeping the kids in the dark about the rising violence—same with the school teachers.” But after the bombing near the school, Salwa’s father decided that was enough and sent them to stay with their mother’s family in Syria. She has no family left in Jaffa. Nearly the entire family fled to Lebanon and then on to Syria …

As they boarded the boat, Salwa’s mother began to cry. “When we asked her what was wrong, she said: ‘We’re leaving … I just will miss our home,’ and then leaned over to my oldest brother and said ‹I’m not sure we’ll ever see home again.’” As they made it further out to sea, the boat stopped. The city was on fire. “That’s when my mother really started crying,” said Salwa. After landing in Beirut, the family continued on across land to neighboring Syria. “You’re going to laugh at me when I tell you, but we went to Bab al-Hara,” said Salwa, referring to a Damascus neighborhood that is also the stage of a popular Syrian TV drama around the Arab world. Strapped for cash and struggling to lay down roots, the family bounced between schools and neighborhoods before resettling in a corner of the capital’s old city. “This is always the case with us Palestinians, we’re always getting pushed from one place to the next. I wish they’d give us a traffic light for once.”

At 16, she married a young Palestinian man, also from Jaffa. The couple rented a small apartment just off the famous Souk al- Hamadiyye marketplace, before finally settling down in Hajjar al-Aswad, a neighborhood on the edge of Syria’s largest Palestinian refugee camp, Yarmouk.

“Our home is gone. It was hit by a shell or an airstrike … who knows,” said Salwa.

Salwa and her son had left for Beirut in late 2012 as the uprising in Syria turned increasingly bloody and violence overtook the capital. Shortly after they arrived in Shatila, a neighbor had sent them a photo of a pile of rubble-the remnants of what once was their home. “I was crying when we left. My sister, she had decided to stay. She asked me, ‘Why are you crying?’ I said, ‘Remember when we left Palestine and Mom said we’d leave for a week and come back? I’m afraid we will leave again and the same thing will happen.’” Now a refugee for the second time in her life, Salwa said she’s constantly on edge in the teeming Shatila camp. “I’ve always hated violence … even arguments make me nervous. Here in the camp people are always arguing and yelling … It’s never, ever quiet and I’m always nervous.”

“I’m scared something will happen here … imagine! But here, living here, I don’t like it. I’d rather go somewhere else. Maybe Switzerland … I’d try it. Definitely not America … I’ve heard that life there is difficult. Norway sounds nice though. I have my father’s passport … it’s the only document I have. It’s from the British Mandate. I was too young to have any documents.”

Salwa’s sister is getting ready to leave … her son took a boat to Europe. He is in Germany now. Salwa hopes that one of her children, who have Palestinian Syrian documents, might be granted asylum in Europe. “All of them are hoping to go to Germany. But the entire world is going there … I don’t know.”

“What kind of luck is that … we fled one war only to find another,” she said. “Where are we supposed to go from here?”

Find the address to your country’s permanent mission at the United Nations and send a physical copy of the U.N. General Assembly Resolution 194, which calls for the Right of Return and compensation for Palestinian refugees. You can also send a digital copy to their email address. Write to the mission asking them why the U.N. continues to fail the Palestinian refugees and ask the mission to take stronger measures to support them and their return in accordance with international law.

Resolution 194 is found at https://unispal.un.org/DPA/DPR/unispal.nsf/0/C758572B78D1CD0085256BCF0077E51A.
You can find your country’s permanent mission’s mailing address and contact information in the Blue Book: https://bluebook.unmeetings.org. Select ‘Member states maintaining permanent missions at Headquarters’ in the first dropdown menu, then your country in the second menu. It should provide you all the contact information you need.

Share the message you sent on social media, tagging your country’s U.N. mission if possible. Include a link to this page of the Kumi Now website along with the hashtags #OngoingNakba, #KumiNow, and #Kumi25.

O Mystery as grand as the universe
O Mighty Force of all creation,
O Power beyond all our power,
You have come to us as an infant. Vulnerable, fragile, beautiful.
You have come to us
in the midst of poverty,
powerlessness and longing.

Given by the Right Rev. David Giuliano, the thirty-ninth Moderator of the United Church of Canada.

From the United Network for Justice and Peace in Palestine and Israel.

We have a YouTube playlist with videos about Palestinian refugees.