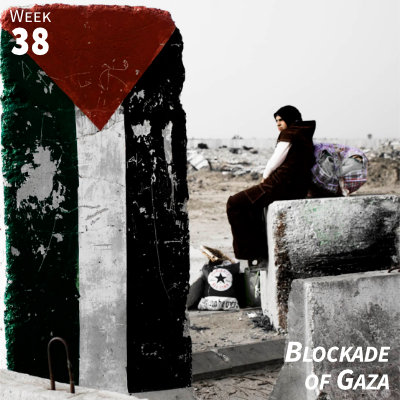 The Kumi Now community celebrates International Day of Peace on September 21 by standing together for the part of Palestine most in need of peace: Gaza. Implemented in 2006, the Israeli blockade of Gaza was intended to punish Hamas for their victory in the 2006 elections. However, the reality is that children, families, and ordinary citizens are most punished by the blockade. Here’s what you need to know about the injustice of the blockade and what you can do so that together we can rise up to stop the blockade.

In Week 13 we outlined the unsustainable living conditions caused by Israel’s blockade of Gaza and the internal political struggle. This week, given the extreme nature of the oppression facing Gazans, we’d like to go into a little more detail on specific issues in Gaza:

In their entry for Kumi Now, Churches for Middle East Peace addresses living conditions in Gaza. Many of the problems facing Gazans in their attempts to live begin with the infrastructure:

“The most recent war between Israel and Hamas was the nail in the coffin for Gaza’s infrastructure. The energy crisis is in part due to bombardment of the territory’s sole power plant during the 2014 war. The Jerusalem Post found nearly 18,000 houses and 170 schools were destroyed and that over 150,000 homes were partially damaged in the war. The blockade prevents most construction materials from entering for fear and suspicion they will be used to fortify Hamas positions rather than repair civilian housing. All wood beams thicker than one inch have been banned to that effect, as have private donations of concrete, rendering reconstruction efforts challenging, if not impossible.”

CMEP goes on to explain the effects of a lack of power production,  water shortages, and food scarcity on the citizens of Gaza.

Aid Watch Palestine informs the Kumi Now community on the poor conditions of Palestinian farmlands in their entry:

“Aid Watch Palestine estimates that around $68 million of aid money was disbursed to cover part of the damages to the agricultural sector due to the war. Most of the interventions by donors were directed to help the victims of aggression, small farmers, fishermen, and owners of animal pens.”

Finally, the Coalition of Women for Peace (CWP) focuses our attention on the  women of Gaza, writing:

“Women living under occupation and siege suffer from both the Israeli army’s violence as well as the violence of their own society. They suffer from restrictions to health care, hygiene, and basic necessities, along with difficulties in areas of employment. The struggle against Israel’s policies vis-a-vis Gaza compels us to stand alongside women as they struggle for rights in their own society.

“During the 2014 war on Gaza, 299 women were killed, 16 of whom were pregnant. At least 142 families lost three or more members, and 700 women were left widowed. Approximately half a million residents were forced from their homes, of which 20 percent have yet to return to permanent residence.”

CWP also provides firsthand accounts of the effects on women, including:

These are just small glimpses into these specific issues affecting the people of Gaza. For more about conditions in Gaza please see Week 13: Conditions in Gaza. And in Week 6: Medical Rights we brought a focus to its effects on medical care. And of course, through the week Kumi Now will publish essays and stories from different organizations and individuals further exploring the specific difficulties of life in Gaza and highlighting what they are doing to fight for the future of Gaza.

Our feet stuck in the mud of the farmlands along Gaza’s eastern border; falling down was inevitable. I got up, wiped the mud stains on my clothes, and continued walking through 250 dunams of farmlands owned by the Ministry of Awqaf (religious endowments) and rented to a number of farmers.

One of those farmers, Mosaad Khalaf Habib, accompanied Aid Watch Palestine through those farmlands to assess precisely the farmers’ losses and follow up on the reconstruction process of the Gaza Strip.

Habib says, “I had a number of eggplants, pepper, and tomato crops back in 2014, all of which were completely leveled and destroyed. In 2014, I got a written financial statement estimating my losses of about US$14,470, but it remained a dead letter as no financial compensation is paid for the agricultural sector. They attributed the problem to the Palestinian division between the ‘two governments’ in the West Bank and Gaza Strip. The Ramallah government refuses to send the money so that the Gaza government doesn’t seize it. As you can see, the only victims are the farmers, particularly those living in the buffer zones.”

He continues, “Since 2000, which marks the beginning of the Second Intifada, no one could reach those 5 dunams up there as they are right next to the eastern border. In the 2008 war on Gaza, the buffer zones were repeatedly invaded by the Israeli occupation forces. Their tanks and bulldozers were crossing into our lands, leveling it and shelling our water well. We documented everything but we didn’t receive any compensation in return.”

Habib adds, “All local farmers cooperated to repair the well so they can get back to business. It cost us around NIS20,000 (around US$5,800).”

Habib says, “In the 2014 war on Gaza, the Israelis shelled the well again as well as the farmlands and irrigation networks. The Red Cross and other organizations assessed our losses but gave us nothing till now. We are starting over again now so that we can feed our families.” Habib adds, “When they come to assess our economic losses, they assess everything including the damaged houses, lands, and cars. Then, they approve a specific sum of money equaling our losses and include it in a paper statement that remains as said before a dead letter.” Habib affirms, “The farmers are crucially in need for monetary compensation so they can continue working.”

He adds, “There are many fertile farmlands, but there are no irrigation networks available and therefore, we can’t get use of it.”

It is worth mentioning that Habib is a father of a twelve-member family comprising 5 boys, 6 girls, and a wife.

Habib continues, lamenting the “chemicals emitted from the Israeli missiles which burned our lands and weakened it. In addition, the Israelis leveled all the trees in the area in 2008 forcing farmers to start over again each time.”

On this year’s crop Habib says, “The crops this year will be few as a result of the Israeli unjust practices. After they sprayed crop-killing chemicals on our crops, and we started over again, they flooded our new crops with water. We call upon the Ministry of Agriculture and the governments in Ramallah and Gaza to help farmers and compensate them for their losses so that we can continue working and pay our debts.”

This week, commit to writing in bold and big letters the hashtag #OpenGaza on every piece of paper currency you come across. The more bills in circulation with this message, the more people will see it. Respect currency laws if able. Alternately, you could write #OpenGaza on every assignment you turn in, prescription you write, business card you hand out, email you send, etc. Take pictures of whatever you write on and post them to social media. Include a link to this Kumi campaign page and the hashtags #OpenGaza and #KumiNow.

This is the sort of action you can take all year! Have #OpenGaza printed on your next order of business cards, etc. Share your creative ways of making this an ongoing action by posting your ideas on social media using the hashtags above. Include a link to this page of the Kumi Now website along with the hashtags #OpenGaza, #KumiNow, and #Kumi38.

Literature: A Prayer for Gaza

Looking at the state of affairs in Gaza, one can feel hopeless. We must always be active in bringing the time of hope to fruition by advocating for a just, lasting, and comprehensive solution to the Israeli-Palestinian conflict. The solution lies in a settlement reached through negotiation and understanding rather than brutality and starvation. We offer this prayer:

Be with the people of Gaza, and all in the Holy Land, who are persistently hoping for an end to the conflict. God, you promise to be with your people during times of grief and times of joy. Be with those in Gaza, be with those who hunger for daily nourishment and justice. Be with those who thirst for water and for a brighter future. Guide those in Gaza as they work together to bring peace to their communities. Help us to learn from them, and to stand alongside them in persistent hope.

In the name of God the Father, the Son, and the Holy Spirit.

“A Prayer for Gaza” is from Churches for Middle East Peace.